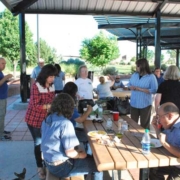 Our next stop on the IFOC Ambassador Tour was in Albuquerque, NM. There were about 18 Chaplains that attended a Pizza and Salad picnic in a local park. We had a great time meeting and talking with fellow Chaplains while we were eating.

The Albuquerque Regional Community Chaplain Corps has been through two very significant losses in the last few years, but continue to make a huge difference in the communities they serve.

The Albuquerque Community Chaplain Corps is one of the first Corps started and is by far the largest active Corps. They serve in many areas, Fire and Sheriff Departments, Disaster Response, Hospitals and Hospice, and helping the homeless. They work in conjunction with the Southern Baptists and Billy Graham’s Rapid Response, Citizens Police Academy, the VA hospital, and a call center for human trafficking. As you see this Corps is very active in many areas of need and collaborate with many organizations to care for people in trauma in their own area as well as many other areas to bring a spiritual presence as well as a physical presence.

They mentor new people in their Corps by placing them with seasoned Chaplains working in specified areas. On the job training is the most effective way to get new Chaplains in the field as quickly and safely as possible.

A question and answer period followed.

We were excited to present three new IFOC Chaplains with their Membership and Credentials.

Thank you for your hard work in all the areas you serve in.

We were blessed to meet with this team that has served in their communities for years. Well done. Thanks for your compassionate hearts.